So I follow Ezra Koenig, vocalist of Vampire Weekend, on twitter and every time I read one of his witty and strange tweets, I think to myself “Wow, what happened to this mystical creature and the rest of his band?”. 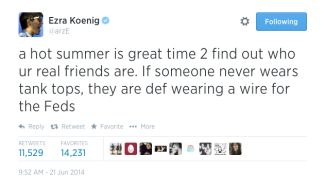 The last time Vampire Weekend came to Cleveland on tour was in 2012.  For those of you who take a little while to do the math, that is TWO whole years.  Now it would be one thing if Vampire Weekend hadn’t come out with a new album in the last two years, but it was just over a year ago that they came out with their third studio album, Modern Vampires of the City.  To be such a popular band, come out with an album, and not even announce a tour is just unacceptable.

Maybe Vampire Weekend is going through a tough time or whatever, but I think they owe their fans an explanation as to why they’ve gone MIA from stages across the world (mainly America).  Yes, every now and then they will grace a few select crowds with their presence;  they performed at the Governor’s Ball in NYC a few months ago and they’re scheduled for a few festivals in the UK in August.  My only problem with this is that I can’t exactly hop on a jet plane or spread my wings and fly to the UK.

When you’re in the music industry and become so successful like Vampire Weekend has, it’s part of your job description to go on tour to promote your music and please your fans.  If you don’t promote your music and please your fans, then you’re going to lose part of your fandom.  Of course there will always be loyalists who stalk your social media accounts and listen to your albums religiously, but there will also be fans who forget that you’re still a band, much less even alive.

At this point I’m honestly a little angry at Vampire Weekend.  They’re obviously smart dudes because they went to Columbia, so why haven’t they figured out that they need to go on tour? Panic! At the Disco came to Cleveland in September of 2013, January of 2014, and is coming again in just five days! If Panic! can grace Cleveland with their presence three times a year, I think Vampire Weekend can manage at least once every two years.

Vampire Weekend: in the unlikely event that you are reading this, I just want you to know that I love your music and I appreciate your Columbia-educated brains and skinny jean wearing bodies.  That being said, I’m getting tired of waiting around for you to announce a tour.  You came out with new music over a year ago, music that I think is your best yet, so I would be over the moon to hear it performed live.  If you want to fly me and all of your restless fans out to the Reading Festival in the UK on August 22nd, that would be divine, but if you don’t deem that to be a feasible option then I suggest you go on tour/provide us with an explanation as to why you are not on tour.

With good intentions and much hipster love,