Last night, Victoria and I went to one of the craziest concerts we have ever been to.  We’ve been to some insane concerts where people are crowd surfing the entire time, violently moshing like there’s no tomorrow, or just flat out being crazy, but this concert was entirely different.  At most concerts, you know what to expect.  If Panic! At the Disco is the main performer, you know the opening bands are going to be relatively popish and if Sleeping with Sirens is the main performer then obviously the openers are going to be post-hardcore/punk.  However, at last night’s show, each of the five acts were surprisingly different, an element of the show that definitely kept the crowd on their feet.

Bobby Vaughn of The Promise Hero opened the night with an acoustic set that, in my humble opinion, was the highlight of the entire show.  The minute we saw Vaughn take the stage, Victoria and I automatically thought he physically resembled Alex Gaskarth, lead vocalist of All Time Low, but as his set progressed I realized that he not only looks like Gaskarth, but he sounds like him too.  Both Gaskarth and Vaughn sing in a higher octave to songs that make you want to dance.  The only difference between Vaughn and Gaskarth is that Vaughn’s band is self-described as rock while Gaskarth’s is pop-punk.  If The Promise Hero plunged into the more popish side of the pop-punk world, I definitely think you could see them touring with All Time Low soon.

The next band to perform was We Were Kids, a pop-punk band from Cleveland.  They had a few solid songs, my personal favorite being Ankle Biter, but the rest of their songs were only okay.  They definitely performed well and were extremely confident on stage, but I honestly don’t think their sound is any different than the other million pop-punk bands out there which is the fundamental problem with pop-punk in general.  People wonder why we need to “bring pop-punk back,” but it’s not so much that as it is we need to bring unique bands back to the music scene.  Pop-punk is just one of those genres that is extremely hard to stand out in.  There are so many ways you can make rock or alternative music your own, but since pop-punk is such a narrow genre, it really is hard for a band’s sound to stand out which I think is the case for We Were Kids. 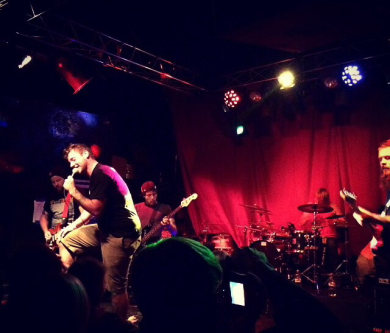 The next “band” was a strip show.  Yes, you heard me, a strip show.  The minute We Were Kids finished their set, a tall, goth woman in a black cloak walked on stage and started setting up SAWS.  I can honestly say that in that moment I thought I was going to die.  I had no idea what to expect, but the minute she started laying out stuffed animals on stage I knew it was not going to be good. As if my heart wasn’t beating fast enough already, THREE women in black cloaks with hoods pulled up and over their faces walked on stage.  I really did not know what was going on and neither did the crowd, but the minute the music started and the first woman/stripper took off her cloak it became clear.  This first stripper was the Queen of Hearts — she attempted to throw a deck of cards out to the audience but clearly she never learned how to flick cards at people because half the cards never made it to the crowd.  Afterwords, she proceeded to decapitate the stuffed animals and saying “OFF WITH YOUR HEAD.”  At that point, all of the guys in the room had shoved their way to the front of the stage and were ready for the real show.  One at a time, each of the three strippers took off their many layers of leather and lace, meanwhile dancing to the music.  At one point, the Queen of Hearts sang to the music, but it wasn’t her own music so I don’t think the goal of their performance was to get a Grammy.  Anyway, the real highlight of their performance was when they fired up their power saws and started hitting their steal belts, igniting sparks.  It was crazy and I’m really sorry that I can’t put any pictures in this post, but it was a tad bit R-rated for this classy magazine.

Anyway, that strip show was definitely a hard act to follow, but Strangers to Wolves managed just fine.  In fact, I think they had the largest crowd of the entire night which is saying a lot considering there was a STRIP SHOW.  This was Strangers to Wolves first show in over a year, but it was their last show ever which is probably why they had such a big turn out.  Various members of the band are moving on so they decided to just call it quits which is a shame because they really seemed to have fun on stage together.  Personally, I wasn’t a huge fan of their music only because it sounds like so much of what is already out there, but it wasn’t unbearable.  Actually, I take that back.  The crowd was unbearable because they were going insane.  Drunk girls shoved their way past me so they could sit on the stage and fangirl, while abnormally large men thought it would be a great idea to mosh.  For those of you who don’t know what moshing is, it’s basically when you get in the center of the crowd and start flailing around, hitting people, and causing extreme pain and aggravation.  It’s unnecessary and takes away from the show because people are more focused on defending themselves than actually listening to the band. So my message to moshers is this: please form a Secret Society of Moshers and mosh on your own time — I value my unbruised skin too much.

Lastly, Hawthorn Heights finally took the stage.  Formed in Dayton, Ohio in 2001, Hawthorne Heights is currently on their The Silence in Black and White 10 year anniversary world tour.  The band has a relatively large/medium fan base, so The Foundry was definitely an interesting choice in venues considering it’s so small.  In any case, they performed really well and had a few songs that really stood out (in particular Niki Fm and Saying Sorry).  All in all, I thought they were pretty good, but I still think The Promise Hero was the best part of the entire show.

One thought on “Review: Hawthorne Heights with Strangers to Wolves, We Were Kids, and The Promise Hero”