The following fill in the blanks come from old school pop punk band, Harbour. This Toronto-based quartet formed back in 2012 and consists of Jamie Mittendorf (vocals, bass), Henry Dowling (guitar), Josh Bombay (drums), and Mike Bielawski (guitar, vocals). In the fall of 2014, the band released their EP, Grade School Summer. The record consists of 6 well executed tracks and my two favorites are titled “Someone Like You” and “So Long.” Learn more about what the guys of Harbour have planned for summer and be sure to check out Grade School Summer on Bandcamp below. 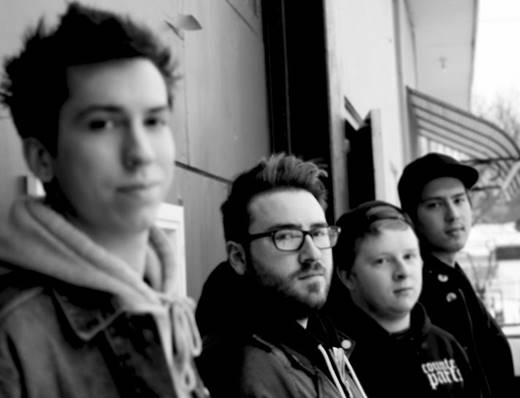 Three words we’d use to describe us are….fast, loud, energetic.

The story/meaning behind our name Harbour is….Jamie liked the name “Harbour” for a band before we even formed the band and it stuck!

The pickiest eater is…. Jamie..he sticks to chicken while the rest of us disregard our arteries.

The most OCD member is….Henry

For fun we like to….play ping-pong, pool, and do normal things like going to bars and watching stupid youtube videos. Dr Steve Brule is our homeboy.

We’re currently listening to….nothing because the CD player in our van is broken. But when it was working, we rocked Rufio, The Starting Line, Counterparts, Rosesdead, Sum 41, Yellowcard, and so much more.

Our favorite songs of all time include….(Josh – Drop The Girl by Hit The Lights) (Jamie – My Mom Still Cleans My Room by MxPx) (Mike – Jasey Rae by All Time Low) (Henry – Probably a Yellowcard song).

We find inspiration from….Drive Thru Records and American Pie.

One thing we want you to remember while listening to our music is….that even though life sucks sometimes that things will get better.

The first song we wrote together was…. “Half Right”

Our favorite tracks to play live include…. “Sorry Not Sorry,” “So Long,” and “Grade School Summer”

Something we learned from creating Grade School Summer was….that you never want to be the first one to fall asleep and going number 2 in the woods is fun.

Something odd we want our fans to know about us is….when we started the band, most of us lived in Toronto so we called ourselves a Toronto band. Since then, we all moved back to our hometowns of Brantford and Paris, Ontario. Also, we originally had a different lead singer and Jamie was playing rhythm guitar & background vocals.

Our last meals would be….tacos. All the tacos.

In the next six months you should expect….us in the process of recording a full length record.