Cincinnati indie rock band Motherfolk will be playing at the Musica in Akron later this month in support of their upcoming release. The quintet was formed back in 2013 by college friends, Nathan Dickerson and Bobby Paver. They just released a deluxe edition of their sophomore 2016 record, Fold, which includes four new tracks. Learn more about Motherfolk from the responses below and be sure to check out their recent live session for the track “Fold I.” 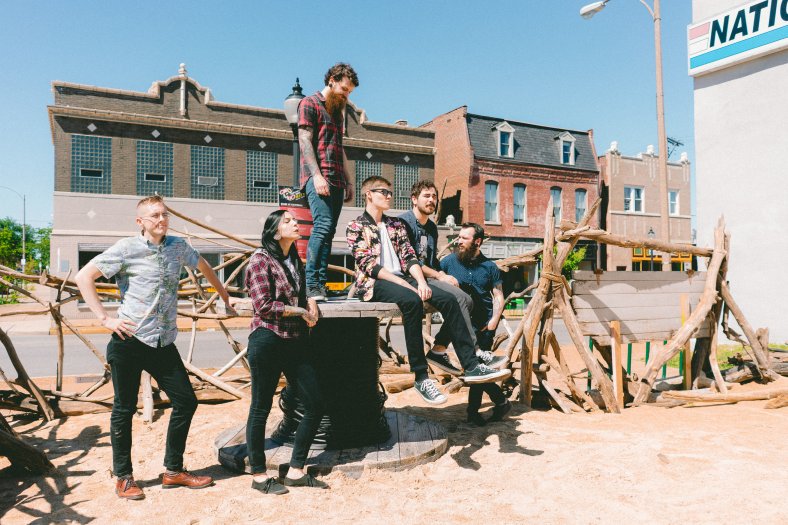 Three words to describe the band?

What is the story of meaning behind the name, Motherfolk?

The name is a summation of the band as a whole. It is an acronym for all of our names – Bobby, Nate, Clayton, Karlie, Joel, Ethan. If you take those letters and move them around, and add some, and get rid of others, you get Motherfolk.

Honestly, it’s just a dumb run we came up with in college. Somehow it stuck.

We all do a lot of different things. We still like to hang out together even when we’re off the road. Most of the time you can catch us in a dingy bar or playing Dungeons & Dragons.

Who is the pickiest eater?

We try to practice weekly, usually around 2-3 hours each time, maybe longer before a show or tour.

Bobby and Nate do all of the writing. Every song is different. Sometimes we have something we’ve written separately that we bring to the table, other times we’ll write together. There’s definitely no formula to it, but we’re always writing new things.

What can you tell us about this upcoming deluxe edition of Fold?

This deluxe version will feature some new tracks that we recorded around the time we were making Fold, but didn’t end up being put on the record. There are also a couple of alternate versions of songs that are on the album. Fold was a really important release for us, so it’s cool to give it one last push before we move on to the next album.

Can you talk about the inspiration behind the “Ryder Robinson” music video?

“Ryder Robinson” is in many ways the summation of Fold because it tells a story of restless discontent. The narrative follows the hero who has committed himself to either a cause or a person, only to find he is incomplete by the end of the journey. Instead of believing and feeling fulfilled he feels empty. As if perhaps all the hard work was for nothing. Its like thinking at the end of a long day “what am I doing and is this even worth it?” It’s the feeling you get when you’re sure life owes you something for being a good person and you just feel a little short changed.

What are your favorite tracks to play live?

After hanging out with fans, we’ll usually go back to where we’re staying and rest. We’re not a big party band, except for once a couple of us did a keg stand in Wisconsin. What a night.

What has been one of your most rewarding experiences as a band?

It’s hard to nail down one rewarding experience, but we’ve had the opportunity to play a lot of cool shows and tours over the years. The most rewarding experiences are probably building up fan bases in cities and getting to see the fruits of your labor, as well as connecting with the people that come to the shows.

Any new music we should check out?

“Run Around” by Blues Traveler (We opened for them once)

None of us can whistle.

Yes he’s real. He has feelings, and he doesn’t like to be called “Bigfoot”. “Bigfoot” insinuates two things: 1.) that he only has one foot, when he actually has TWO very large feet, and 2.) that being Bigfoot is all he can contribute to society. That he’s just a freak, a legend, lore. It’s 2017 and it’s time we give him the respect he deserves. He’s really a good guy deep down. Bigfoot, even bigger heart.

What can we expect from Motherfolk in the coming months?

In the winter we’ll be buckling down to do some more writing and hitting the road again at the beginning of the year!