Tonight’s show was in the Cambridge Room at the Cleveland House of Blues. Danielle and I received media passes so we had permission to use better cameras in the venue but it turned out we didn’t need them. We were able to find a spot in the front off to the side where we could easily see the stage and take some nice pictures. The first band to perform was Stages and Stereos from Tallahassee, Florida. Formed in 2007, the band went on hiatus in 2010 but got back together in 2012. Their newest music has a more relaxed approach and mature quality. My favorite song that they performed was “Small Town Favorites” which was released last year. 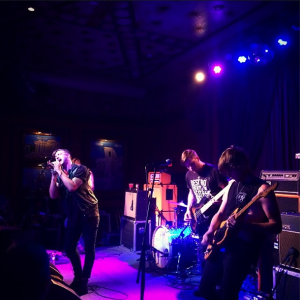 Heartist performed next with a heartier and heavier approach to rock. Formed in 2011, the band has used its heavy melodies and heartfelt lyrics to increase their fan base. Vocalist Bryce Beckley sounded a lot more intense live than recorded but it was something I expected. The best thing about their performance was their dedication. I predict this band will go far with their latest music, diligence, and apparent goals.

Our Last Night is a band that has definitely mastered the art of songwriting. They connected with the crowd effortlessly and their lyrics are very relatable. The best song they performed was “Sunrise” but they also performed two different covers : Katy Perry’s “Dark Horse” and ‘N Sync’s “Bye Bye Bye.” I usually dislike bands when they perform covers because it seems like they are just trying to fill in their setlist but tonight was a different story. Since I was not too familiar with their music, hearing those songs helped me put their sound into perspective. The energy they emanated gave much more meaning to their own song lyrics. I would go see them in concert again in a heartbeat.

Finally, Set It Off performed with an insane amount of energy. The band formed in 2008 and has yet to stop going places. They constantly tour and push themselves further than before. Their approach isn’t as heavy as Heartist but they’re distinctly more theatrical and dramatic. Their latest album was released last year but they just announced they’ve already finished another album that will be released soon. Their performance brimmed with talent and passion fueled by the crowd. People screamed the lyrics, danced like crazy, and crowd surfed during the whole set. Vocalist Cody Carson’s goal is to evoke emotions and the new era of Set It Off does just that. It’s crazy to see just how far the band has come in only six years and if they keep this up, who knows what is in store for them next.