Phantom Runners is a 3-piece “feel-good” band from Brighton. The band consists of members Adam, Arron, and Sam. They formed back in 2013 and released their debut EP, Relevance, this past August. The band already released a 2015 track titled “Laserbeam.” I love the wistful, timeless dream qualities in their music so be sure to check out “Laserbeam” below. 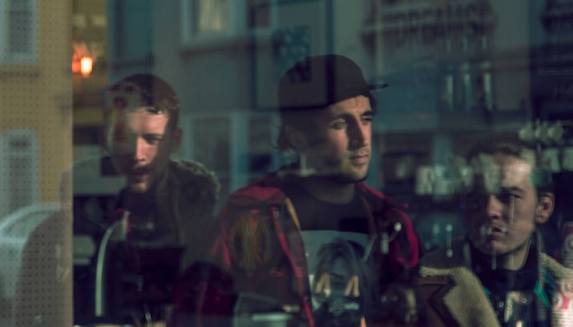 Three words we’d use to describe us are….Oh man I feel like I’m doing a bio for a dating site… we would describe ourselves as Tall, Dark & Handsome, (except Sam) our hobbies include Long Walks off of Short Piers, and we’re looking for discreet no-strings-attached fun.

The story/meaning behind our name Phantom Runners is….We could tell you but we’d have to kill you.

We met each other…..Me and Adam started writing tracks after a chance meeting about 2 years ago, and put together our first incarnation of the band with a few other guys. Eventually we found Sam about a year ago in a bin and took him in like a little lost puppy. As it turned out, he wasn’t half bad at hitting shit in time to music.

For fun we like to….Oil up and play Twister.

We find inspiration from….Stories we hear, programs we watch or people we talk to. When we play in a room together we often write songs in 30 minutes, if one person has a good idea the rest of us get inspired and it falls together very quickly.

Our favorite tracks to play live are….For us probably the new stuff, that isn’t released yet…The 3 or 4 shows we’ve done with our new material have been amazing, and people seem to dig the new stuff even more!

If we play another band’s music it’s….Worth re-working it to make it your own! I think it’s healthy for bands to do covers, especially if you re-write the song, it really makes you think about the parts that everyone is playing and helps you to mold your sound for your original songs.

Something odd we want our fans to know about us is….If they’ve read this whole interview they already know a few odd things!

We’re absolutely terrified of…. Needles, Bailiffs, the rise of the far-right in the UK and Europe, Putin f****** shit up in Ukraine, Old people driving on the motorway.