Cleveland’s punk rock band How About No has an upcoming CD release show at the Foundry on May 24th. The trio consists of Mike Donovan, Anthony Zart, and Nicholas Peters. How About No formed back in 2000 and draws influence from artists including NOFX, Weezer, and Masked Intruder. Check out their music video and a few tracks from their new record, 8 Surefire Ways to Stay Irrelevant on Bandcamp below. Don’t forget to stop by The Foundry this Sunday to check out the rest of their new record and awesome glow in the dark posters! 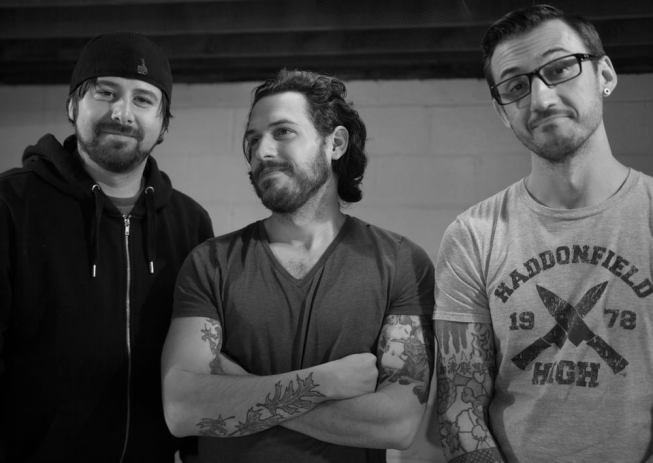 Three words we’d use to describe us are….How… About… Mutton…

The story/meaning behind our name How About No is….Every generation has it’s own played out sarcasms/quips, and in 1999 “howaboutno” was as popular as “totes adorbs” is today, though with different intentions. Fifteen years ago when the band was scheming up names, no one could decide on one. Each member hated the names the others were pitching, and the favorite response to anyone’s suggestion was… yep, you guessed it. After a few hours it was settled this would be the name. We still hate it to this day.

The pickiest eater is….We’re all picky in different ways. Donovan will only eat chicken wings extra, extra crispy. Nick and Anthony pretend to be vegan from time to time. Anthony won’t eat salad, ever. But we all agree that a balanced breakfast is the cornerstone to any productive lifestyle. That and Flintsones vitamins.

The most OCD member is….Nick’s house is serial killer clean. Anthony can’t grow a full beard because he tears at it when bored. Donovan has been known to use a Microherz Balance when tuning his bass. So… choose your own OCD adventure.

For fun we like to….Research crop rotation in the 14th century.

Our favorite songs of all time include….There are literally too many to name… perhaps one of the most unfair questions to ask a musician. Strike this from the record.

We find inspiration from….People who actually “do it”. The bands/artists who create with sincerity. People that aren’t working to achieve some status in a trending genre or clique. People who dig in and materialize a piece of genuine art from a place that is their own. (whoa, serious answer)

One thing we want you to remember while listening to our music is….We came to this kind of music from a place of energy and youth — and it remained. Bands like Operation Ivy, Green Day, The Descendants, No Use for a Name… they still drive and excite us. So we create music from that lasting enthusiasm for those bands and genres. We hope to have a hook as much as we have a snare or snarl. And in that regard, we don’t grow up or out of this genre.

The first song we wrote together was….Hard to say. There was a lot of old material written before Anthony joined the band. A lot of songs become molded into others and even more were left to rot away with the ages. It was a simpler time back then.

8 Surefire Ways to Stay Irrelevant was recorded in….Our latest album was recorded with Donnie DeBiase at Studio D. He is stellar behind the ol’ faders, but we all agree he missed his chance to be the best goddamn heavy-weight champ of the WWE.

Something odd we want our fans to know about us is….Nick’s full name is Nicholas and he plays the trombone. Or trumpet. Something you blow into. Donovan has survived every dangerous encounter in his life up to now. Anthony had a pet tarantula until he didn’t anymore.

We’re absolutely terrified of….Centipedes. In your ear. Just imagine… those long, hair-thin legs wriggling their way across your sleeping face, probing and delving into your ear canal. It’s cellular, truncated body boring itself deeper and deeper into your cranium, chewing past your eardrum while your slumber. Maybe it uses it’s leech-like centipede mouth to siphon vital grey matter off your brain… or perhaps it roots it’s many and filamented legs into your mind thereby assuming control of your base-functions. Yeah. Centipedes. Have you vomited yet?

Our last meals would be….Pizza. There is no other answer.

In the next six months you should expect….We are planning an epic, one-off single-show tour to Chicago in July. We also hope to do something fun for Halloween. At the moment we are stalled on that because we want to dress as The Brady Bunch — but everyone wants to be Alice and who the fuck wants to be Mike Brady? No one, that’s who. Don’t get us started on Cousin Oliver.

One thought on “Interview – How About No”