The following fill in the blanks come from Cincinnati pop rockers, BoyMeetsWorld. This 5-piece consists of members Craig Sulken (vocals), Brad Sulken (bass), Ryan Sulken (drums), Andy Richter (guitar), and Drew Thomason (guitar). The band formed back in the summer of 2012 and is known for blending the pop-rock and pop-punk genres. Their debut full length, Become Someone, was released on June 16th. BoyMeetsWorld played the entire Warped Tour this past summer and is touring this fall with the band, 7 Minutes In Heaven. Learn more about the band from their responses and be sure to watch the video for their track “Feel It In The Air” below. Don’t forget to check for a tour date in your area! 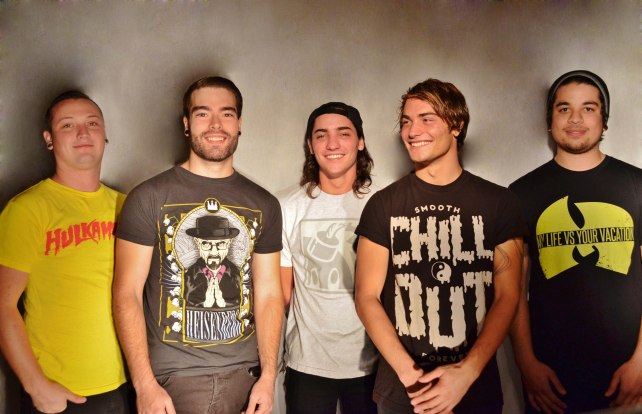 The story/meaning behind our name BoyMeetsWorld is….About graduating high school and entering the real world, finding your place for yourself, what’s going to make you happy in life and what you’re passionate about.

The most OCD member is….Craig

Our favorite songs of all time include….Anything by Mayday Parade

We find inspiration from….Life in general

One thing we want you to remember while listening to our music is….Be positive and happy

The first song we wrote together was…. “Right Where We Belong”

Our favorite tracks to play live include…. “Right Where We Belong,” “Moving On,” & “Head Up High”

Something we learned from creating Become Someone was….It’s really hard to take on the challenges of putting out a full length by yourself.

Something odd we want our fans to know about us is….There are 3 brothers in the band.

We’re absolutely terrified of….Breaking down on the road.

Our last meals would be….Chipotle.

In the next six months you should expect….Touring, lots of touring!

One thought on “Interview – BoyMeetsWorld”