Last night, I saw my first farewell show, and the vibes in the room weren’t nearly as sad as I anticipated.

Microwave kicked off the first night of Motion City Soundtrack’s So Long, Farewell tour. Microwave is the youngest band on this leg of the tour which is cool because lead singer, Nathan Hardy, talked about how he’s loved Motion City Soundtrack since he was a kid. This was my fourth time seeing Microwave, and every time I see them they’re playing bigger and better tours and venues. In Portland, it’s very rare to see the first date of a tour, but it’s also nice because all the bands are so energetic. Microwave moved around more on stage last night because they actually had the space to do so, unlike on the smaller stages I’ve seen them play in the past. “Work It Out” and “Thinking of you,” were two of my favorites from their set. Once again, Microwave topped their last performance that I saw, and showed their touring experience through their comfortable demeanor playing such a big show. I’m excited to watch them continue to grow with the exposure they received from opening for The Wonder Years, and now for Motion City Soundtrack. 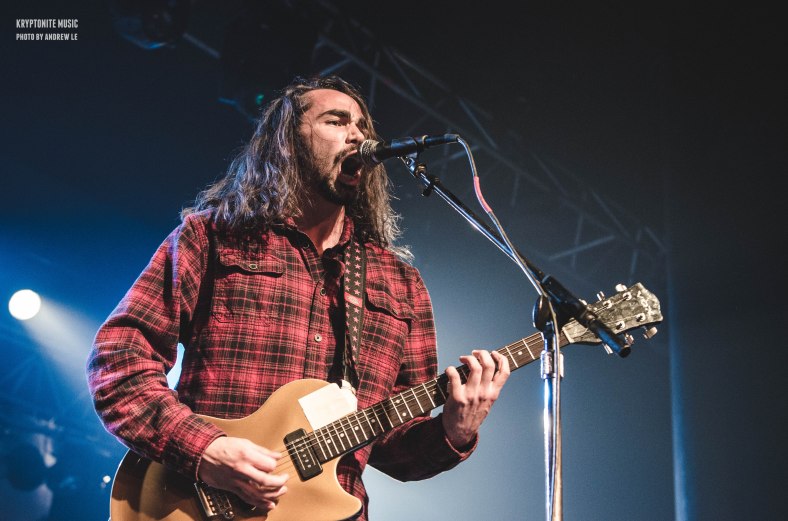 Prior to last night, I didn’t know much about The Spill Canvas except that they were from the same generation of bands as Motion City Soundtrack. During The Spill Canvas’ set I learned that they’ve toured with Motion City Soundtrack quite a bit in the past, so having them on the final MCS tour is perfect, especially because a majority of the crowd loved both bands, and enjoyed singing along during The Spill Canvas. My favorite thing about their set was how much excitement they showed when they were playing. Even after driving across the country from the end of their headlining tour to hop on this one, they were nothing but energetic on stage. I’m glad that they were on this leg of the tour because otherwise I may have never thought to check them out.

The feeling in the room changed as we waited for Motion City Soundtrack to take the stage for their last time in Portland, and their first night on their final tour. It seemed like everyone held on to the feeling of ‘this is it’ until lead singer, Justin Pierre, said that he didn’t want to get too emotional, he just wanted it to be a fun night, and so then everyone really began to let loose after that. Justin admitted to being nervous because of the added pressure that comes with playing these final shows. He struggled to remember chords and lyrics for “Antonia,” but the crowd was more than ready to help him sing it, and encourage him to keep trying when the band had to stop mid-song. They all kept grinning throughout their entire set, especially bassist Matthew Taylor. The crowd couldn’t help but grin as well because Motion City Soundtrack is such a fun band to see live.

I didn’t know many Motion City Soundtrack songs going into this final show because it wasn’t until recently that I began listening to them. I knew some of their most popular ones that they played like “L.G. FUAD,” “Everything Is Alright” and “A Lifeless Ordinary (Need a Little Help).” I went to this show because Motion City Soundtrack is the first band I’ve gotten into that is from the generation of artists who influenced the bands I listen to today. Not surprisingly, I was definitely one of the youngest people at the show because Motion City Soundtrack formed the year before I was born. I never really cared for other bands that formed in the late 90s and early 2000s, like The Starting Line and Taking Back Sunday, until I heard and loved Motion City Soundtrack, so this show felt more like a beginning, for me, than an end because of my recently developed love for their music. For the majority of their fans, though, this tour was very sentimental. Motion City Soundtrack’s original drummer, Tony Thaxton, left the band in 2013, but decided to come back for the So Long, Farewell tour. Justin talked about being excited, yet fearful of the future before they finished their encore with “The Future Freaks Me Out” for their final Portland show.

I’m sad that I’ll never get to sing along to every song at a Motion City Soundtrack show, but I’m eternally grateful for the music that they made, the influence they had, and for getting to experience such a great farewell show.

Check out more photos in our gallery!