Our next featured band is Instead of Sleeping from the “City of Bridges” or Pittsburgh, Pennsylvania. This four-piece indie rock band is comprised of Shaun Sweeney (guitar/vocals), Jeff Binando (bass/vocals), Woody Wright (guitar/keys/auxiliary percussion), and Corey McClaine (drums). They formed in 2008 and have shared the stage with artists such as Fun. and Hawthorne Heights. They released a new album earlier this year titled Young Lungs and my favorite song is named “The Ones.” I recently sent them some fill in the blanks to find out more about them and their new music. 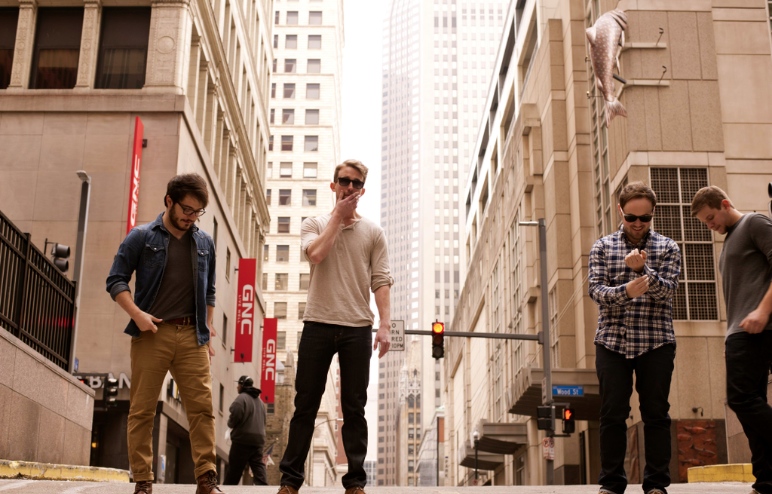 A few words we’d use to describe us are…. High energy and exciting

The meaning behind our name Instead of Sleeping is…. We always thought it was a cool question: If you never had to sleep again, what would you do with all the extra time?

The pickiest eater in the band is…. Woody (guitar/keys/aux percussion), since all he eats are Grilled Chicken sandwiches and Waffles. He also has been quoted saying “I would rather eat my own foot than eat at a Denny’s.”

The most OCD member is…. Probably myself, Shaun (vocals/guitar), just because I need every detail for shows etc.

We met each other….(how, when, where, etc.) Woody and I went to kindergarten together, Corey McClaine I met running away from a party that was getting busted by the cops, and I met Jeff at a show we played with Madina Lake.

For fun we like to…. Make embarrassing  #WoodySux jokes and pictures. Check them all out on Instagram

We’re currently listening to…. Arctic Monkeys, Portugal. The Man, The Black Keys, Cage the Elephant, The 1975, The Neighborhood

The first song we wrote together was…. Hotel Room 412

The member(s) that does most of the songwriting is…. I (Shaun) write the lyrics but the music is 100% collaboration.

One thing we want you to remember while listening to our music is…. First and foremost, thank you so much for listening. It means the world to us for even someone to just listen to any of our songs. I guess the first thing that should come to mind is that you can literally tell us anything about the music good and bad. As difficult as it is to create an album and hope that everyone will love it, nothing is as important as getting some feedback. Of course we love the good feedback but the bad is just as important so we can continue to try to polish our sound as best as we possibly can for everyone. I know it is an odd thing that you want people to think about while listening but we write music for the listener so in return we just want to know what we can keep doing or do better.

Young Lungs was recorded in….Young lungs was a production that had been worked on in a total of four locations over the course of a year and finalized/tracked in just short two months. Young Lungs was a combination of writing in Pittsburgh, PA, our hometown and some pre-production ideas bounced back from Steve Soboslai (Punchline/Blue of Colors) in Nashville, TN. After about eight months of doing this we had headed out to Chicago, IL for the month of November and completely revamped all ideas and consolidated them down to 4 tracks with Producer, Marc McClusky (Weezer/Ludo/Everclear). After leaving Chicago to come home for Thanksgiving we felt like we had to do more with this album. Over the course of a month we wrote and recorded 4 more tracks with our greatest studio friend, Matt Very (Very Tight Studios). The remaining four songs were then sent back to Marc in Chicago and mixed. All 8 tracks were then sent to Dan Coutant (Sun Room Studios) for mastering.

Something we learned while recording Young Lungs is….This… is… really… hard…After getting around that, we realized that this process was an animal we had to grab by the horns and fight. We were released into the world after recording as new human beings, honestly. We learned enough to write books on books. It was an insanely grueling difficult task to scrap all of the ideas that we had and just pull little parts of songs to make an entire album. One of the coolest things we learned from this process was to write songs with the end result in mind. Basically what this means is don’t write a song for a serious amount of sick bass lines or drum fills, but write music where each instrument compliments each other so that the final result is a SICK song. It’s like a peanut butter jelly sandwich, peanut butter, jelly, on bread. It doesn’t need more sugar, it doesn’t need an extra layer of bread. It is what it is, peanut butter and jelly, and it makes sense. It is just easy and perfect together and leaves no room for unnecessary additions. We went in as four people who played cool parts in songs, and we left as a band that played full just as powerful songs together. A really good example of this can be found in any song by Lorde. She makes it so powerful just by having Vocals, beat, and a bass line then she calls it a day, no complications.