In the beginning of September, Danielle and I attended a Black Keys concert. As we walked out of the arena we were approached by a member of a local band named Light Weight Slams. We were given a free CD and had no idea what to expect. Honestly, Danielle and I thought we were in store for metal music because of the album’s artwork and band logo. Needless to say we were pleasantly surprised to find a simple and appreciable rock band. It consists of Jared Thomas (lead vocals), Nick Cifani (guitars, vocals), Tony Cifani (bass, vocals), and Jared Short (drums). They are having an album release show later this fall at the Foundry so I sent them some fill in the blanks. 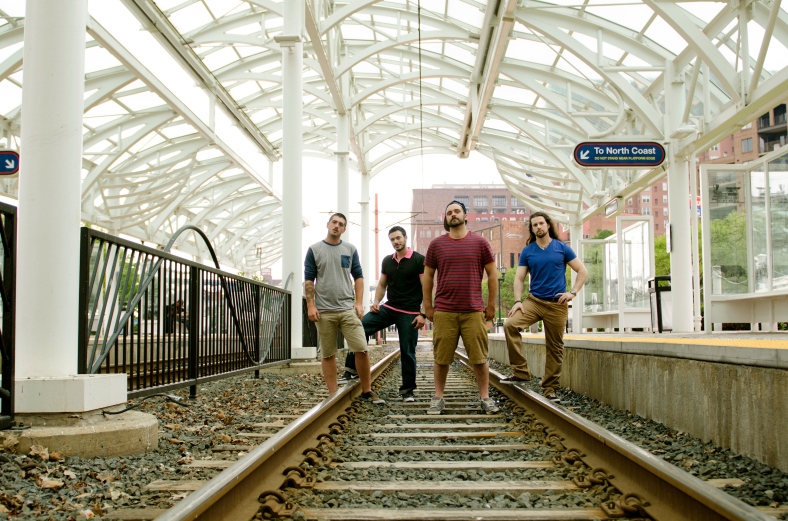 A few words we’d use to describe our band are….HIGH-ENERGY VIBRATION

We met each other….by predetermined fate. Tony crossed paths with JT while trying to score some chewing tobacco from JT in the men’s bathroom at a high school prom. Both were doing their best to avoid their dates at the time. Nick joined up with Tony and Jared while attending college at BGSU. During a long summer on campus, Nick brought up a few old instruments and the band fell into place. When Short finally busted onto the scene, we knew we had found the fourth member of the crew.

The first song written by the band was….a song entitled, “Half a Mile From Home.” We were hanging out and jamming at our house in college, and all of a sudden, we started grooving to an original riff. Lyrics were implemented, and by the end of the day, our first song was complete. Ever since then, original tunes flowed effortlessly.

Our debut album was recorded in….a raging pit of fire, guarded by dragons. (AKA Blackfoot Studio in Cleveland, Ohio)

The meaning behind our name Light Weight Slams is….That information is currently unavailable through this terminal.

We’re currently listening to….A full orchestration of crickets, frogs, and other creatures of the night, singing and flowing together in complete unison and harmony outside of our window in Blackfoot Studio. It keeps us in tune and on time. These wee hours of the night are a peak time for inspiration, and connect us with the natural flow of the universe.

The furthest we’ve ever traveled for a gig is….Goose Creek, South Carolina. It was one of the stops on our East Coast Tour we did a few years ago. As we pulled into the venue, Tony cut the corner a little tight, causing our 16-foot trailer to fall into a gigantic ditch in front of the venue (may or may not have been a result of Mr. Jack Daniel’s). Luckily, this place was a big hang out for lumberjacks and grizzly-looking guys, who took great pleasure in rounding up their boys and helping us lift it out of the ditch (lots of fist pumps, victory shots, and man-to-man “atta-boy” ass slaps ensued). These guys may have looked like monsters, but they had kind hearts and really helped us out that night!

For fun we like to….Go on tour and leave our stinky, after-show socks in random girls’ purses, for them to find at a later date.

Our last meals would be….Something we hopefully don’t have to think about for a while, but if it had to be something, it would be squirrel sandwiches.

One thing we want you to remember while listening to our music is….This self-titled album is only the beginning….Stay tuned.

In the next six months you should expect….A new album, continued touring, and a dang good time.

Our favorite words to live by are….None, because music is the master communicator and the ultimate language of the Universe!