Our next featured band, Wander, just released their debut album this fall through their label, We Are Triumphant. They’re a 4-piece pop punk band from Maryland consisting of Andy Cizek (vocals), Jack Rentschler (guitar/vocals), Mack Gallagher (guitar/vocals), and Brett Schleicher (drums). Their debut self-titled album consists of 11 diverse tracks that aren’t confined to a specific genre. Their fans come from very diverse backgrounds and I think it’s due to the fact that they have well-written and relatable lyrics. I really enjoy the album’s artwork and I cannot wait to see where this latest release takes them. Find out more about Wander by reading their responses below and check out the music video for their single “Thanks a Lot.” 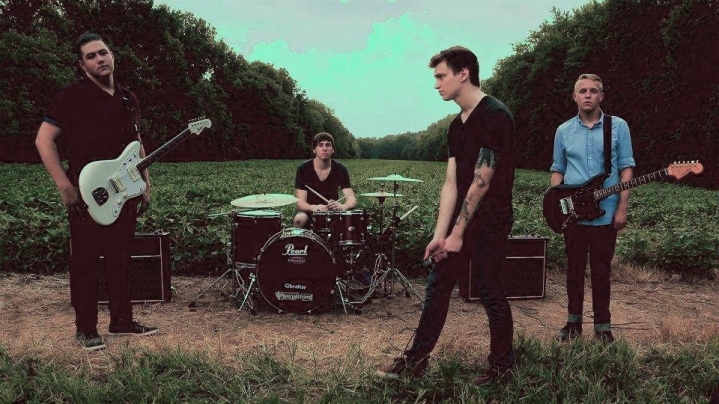 The meaning behind our name Wander is….

Jack : The name Wander came from my girlfriend actually. I was bouncing different name ideas off of her to see if she liked any, and she said “What about Wanderer?” I was right in the middle of playing the video game Shadow of the Colossus for Playstation 2, and the main character’s name is Wander, so I had the idea to shorten “Wanderer” to just “Wander.” It really is the perfect name for our band since our sound “wanders” between different genres.

Andy : To me it represents the unpredictable journey that is life.

We met each other….

Jack : Andy and I have known each other since we were juniors in high school; we’ve played in various bands together throughout the years. I met Brett through our local music scene. We didn’t really know each other on a friendly basis but knew of each, so I hit him up on Facebook one day asking if he wanted to play drums for us and the rest is history. About 5 months after we met Brett, our old bass player ran into Mack at Walmart (they went to the same school so they were familiar with each other already) and Mack inquired about the vacant guitar spot. We sent him the songs to learn, invited him to a couple practices and he killed it so we asked him to join.

Brett : We had played in several different (mostly heavy) bands around the Mt. Airy/Frederick area of Maryland and shared the same stage at one point with another, but we didn’t really know each other that well. Jack and Andy started up Wander trying to go for a different sound than they’re used to. They had written most of our debut album before the band fully formed. Jack hit me up randomly and sent me a few demos they recorded together; I loved the sound so I went and jammed with Andy and Jack and immediately joined the band. After we recorded most of the album, then we were looking for a second guitarist and Mack had hit us up, came and tried out, and then had joined.

The pickiest eater in the band is….

Mack : No one is picky, we eat anything and everything.

Jack : Probably me. Don’t get me wrong, I love all different kinds of food, but I’m lactose intolerant so I try (and fail) to watch what I eat. I guess I’m kind of picky by default.

The most OCD member is….

Brett : Jack for sure

Jack : Andy and I tie for that one. But we prefer the term “perfectionists.”

Jack : The 1975 (self-titled), The Contortionist (Language), Transit (Joyride), Tides of Man (Young and Courageous), James Blake (self-titled), Copeland (You Are My Sunshine), B.B. King (Live at the Regal)

Our musical influences include….

Mack : Nocturnal Emissions is an inspiration to all

We find inspiration from….

Andy : I am most inspired from real life. I usually write about the shittier parts of life because they invoke the most intense emotions. I really do like Attila though.

Brett : We all have our idols, mostly bands and certain musicians from our favorite bands give us our inspiration in our music, and also in life.

The member(s) who does most of our writing is….

Brett : Jack pretty much writes all the music, and Andy writes the lyrics and melodies.

Andy : I would say Jack, he pretty much creates the foundation of every song. It’s close though, we all contribute our own parts.

Jack : I create the main skeleton of the song, demo it with Andy and send it out to everyone. From then on it’s a refining process; everyone irons out their respective parts in the song.

The first song we wrote together was….

One thing we want you to remember while listening to our music is….

Brett : We want our music to connect with you and help you in the most positive way. Our songs are personal and we put a lot of heart into our songwriting. We don’t want to write a catchy song just for the sake of it being catchy. We want to write music where we feel anyone can see a part of themselves in it whether it’s the lyrics or the music.

Wander was recorded in….

If we play another band’s music it’s….

Mack : Probably two date night meal specials from Outback to split between the four of us

Andy : I’d panic and just get Chipotle or something

In the next six months you should expect….

Brett : Touring, more merchandise, another music video, and some other cool surprises that I can’t currently think of.

Andy : New content from us in support of the album (think videos), plenty of shows, other fun announcements! Thanks for the interview and thanks to anyone who checks out our band.