When I found out Forgery at Best was from Ohio I knew I had to check them out. This 4-piece alternative band consists of Eric Prater (guitar), Chris Albers (drums), Taite McKinney (lead vocals/bass), and Robb Clark (guitar/vocals). They just released their first single “Blank Page” and plan to record more in the upcoming year. They have a few close shows coming up this November so I sent over some fill in the blanks to find out more about them and their release. 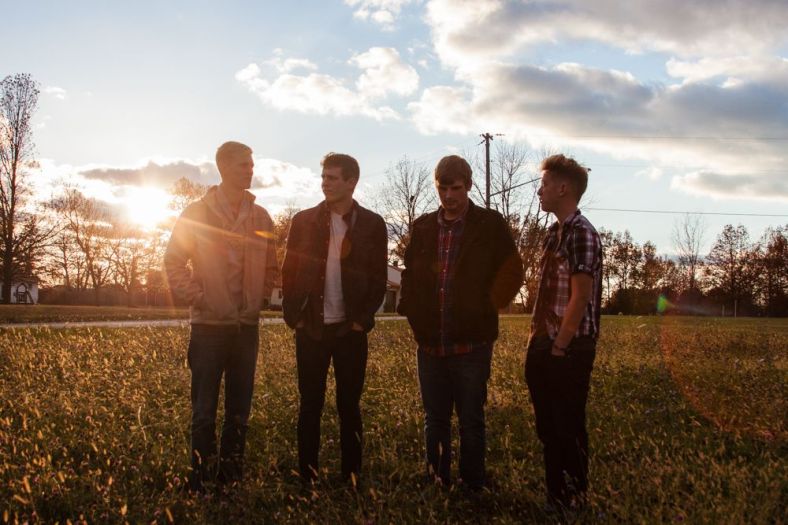 The meaning behind our name Forgery at Best is….Actually, to understand this, you need to know a little background. This band was originally started by our old guitar teacher and he named us Grounded ‘Till Friday. When it was started up, all of the kids in it were in Jr. High. The name was pretty cool then. When we started getting serious and realizing that we could maybe do something with what we had, we decided to change the name. A few names, such as Northern Bound were thrown around. We had kind of given up, when Eric texted us the name, and we really dug it. And it just stuck.

We first met each other….We all actually took lessons from the same guitar teacher. Chris and Robb have known each other growing up. Taite and Eric were in a band before Forgery at Best, and asked Chris to be the drummer since they were all friends. Robb came into the picture about two years ago, and the rest has been history.

The pickiest eater in the band is….We aren’t sure if there is one. We all eat pretty much anything. We’re pretty particular about our Taco Bell and Chipotle orders though.

The most OCD member of the band is….Chris, by far. He’s very particular about his drums and how things are going when we write music. It’s pretty insane honestly.

We’re currently listening to….A pretty big variety of things. We’ve all been listen to different artists like From Indian Lakes, State Champs, Crown The Empire, The Orphan, The Poet and Artifex Pereo. We’re all have our own individual music tastes, so we’re usually all listening to different things.

The member(s) who do most of our writing is….It’s a collective effort when we write music. Usually, Robb or Eric come up with some kind of chord progression and bring it to practice. From there, we all take the idea and turn it into a song as a group, offering up ideas for how the song should go, and then trying them out to see if they fit.

We find inspiration from….The music that we listen to and what we have played in previous bands. Like we said, each of us have different music backgrounds and bring different music styles to the table. We look up to bands like The Orphan, The Poet and Come Wind because they kind of combine different genres and make their music sound like something other bands aren’t doing. We believe that we have the ability to do that as well.

One thing we want you to remember while listening to our music is….We just go for that “yes” feeling, is the best way to put it. We all come from different musical backgrounds and have played in different bands as well (anything from post-hardcore to acoustic rock). So we have kind of taken all of those musical genres and combined them into something that we can define as ours. We want people to remember our music as something that is different, but still appeals to everyone at the same time.

The first song we wrote together is….It’s actually a song that we used to play called “Thrones.” Up until about 8 months ago, we were a pop rock band that was influenced by the likes of Cartel and Sparks The Rescue. The song kind of started a transition for us from that pop rock style, to the style that we play now.

“Blank Page” was recorded in….Actually September. We met Jake Bryant of Jake Bryant Productions through a mutual friend, and found out that he’s an amazing guy and friend to work with when recording music. We wanted to get the song out as soon as we could so we would have something to show people. Jake did an amazing job and we’re very proud with the finished product.

If we play another band’s music it’s….It really depends. Robb would probably want to play something like letlive. or possibly Tracy Chapman. We played a cover of a Ke$ha song, “Your Love is my Drug.”

Something odd our fans should know is….When Taite was in 7th or 8th grade, he ran into a tree and part of his ear fell off. He had to get it stitched back on. Seriously, we’re not lying.

Our last meals would be….All of us would probably choose Taco Bell. We all eat there an unhealthy amount of times per month.

In the next six months you should expect….Plenty of shows. We’re trying to play as shows as we can, wherever we can. Also, another song will be in the works this winter, so be on the lookout for that!