I first found out about Friday Night Lites when their bassist followed the magazine on twitter. They’re a fairly new pop punk band from Portland, Maine who released their debut single and music video in the beginning of August. They immediately wrote up an ambitious plan, established goals, and entered the studio within weeks of forming in April of 2014. When I saw that their single was titled “I’m a Sandra Bullock Kinda Guy,” I knew I had to check them out. Their vocalist, who’s currently on a trip to Venice, just answered some fill in the blanks for us. Check out his responses and their music video below. 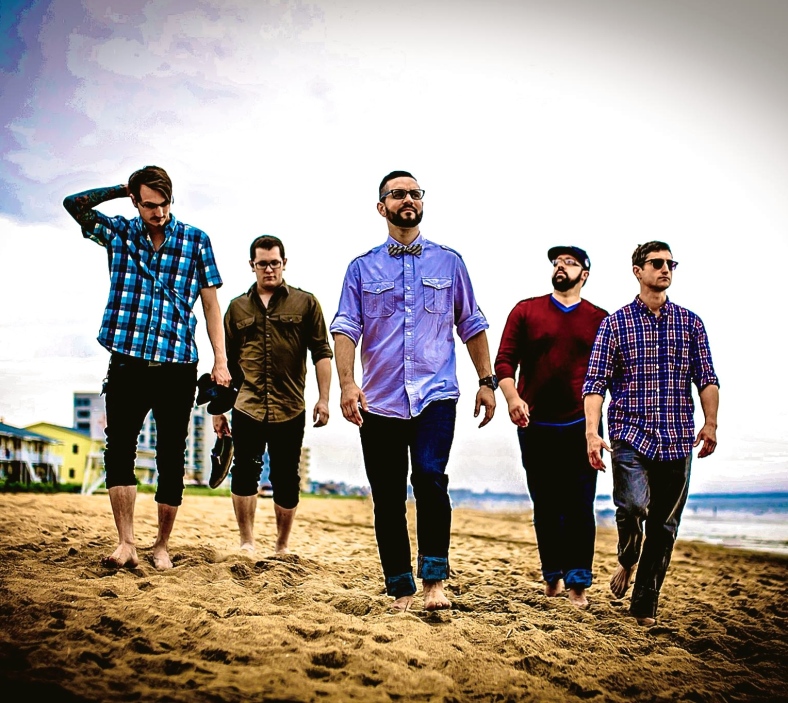 The meaning behind our name Friday Night Lites is….simple. We love sports & we love what it means to be a “team.” You know, when a community goes out on Friday nights to support the team, under the lights? That feeling of “Family.” Plus, there’s always room for growth and improvement, like a team. Thus spawning our motto “This Is Family.” We want to welcome everyone into our family as well. Not everyone out there has anyone to turn to. But, music…..Our music, we hope to pull you in. Just like the games did on Friday night. Make it feel like home.

We met each other….Matt and Jameson pulled me, into an old band they were forming years ago called Kids Collapse. It was good, but eventually, that ended. Matt and I spent 4 or 5 years looking for the right people while we continued to write music. While looking for our sound, we picked up Nathaniel off a Craigslist ad less than a year ago. He fit right in, and even if he did have a metal background; his passion and ability to mold himself, sold us. Not a month later and Jameson offered to fill in on bass till we found a full timer………Luckily, he ended up being that full timer. Thanks buddy. Finally, about 7 months ago Jameson had a few Facebook messages back ‘n’ forth with Dan, just about music and all. Next thing we knew the two of us were meeting him at a local Applebee’s for some 1/2 priced appetizers and some sweet hangs to see if we could work together. And we did…

The pickiest eater in the band is….tough to say, but I’ll go with Matt and his Paleo Menue’d Lifestyle! He will outlive the rest of us for sure. Some of us, like Nate. eat a budget meal made up of only potato salad. Still picky I think, no?

The most OCD member is….OCD hmmmmm. Well I think we carry that trait in us all a little bit. Myself, a lot. But mostly in my home life. I clean and rearrange a lot at home. I like neat and organized. I had to organize our merch bins my way. I know Nate never stops touching his knob(s) in his pants I mean his amp!!

For fun we like to….
We’re currently listening to….State Champs, The Story So Far, Wonder Years, Title Fight, 80’s Pop. Anything that happens when you type ‘vocal trance’ into youtube.
We find inspiration from….I think we find inspiration in each other a lot of times. We all have such different qualities that contribute to our band’s entirety. I feel that really pushes us to shine in what we do best individually. None of us want to let each other down.

Our musical influences include….What doesn’t influence music these days? It’s all about stepping up to the plate and knocking something out of the park. We can all agree music comes in so many forms these days. I hear a lot of Punk and Pop in our stuff. But, wouldn’t leave it at that. Most of us enjoy everything that is music.  We are a melting pot of everything we hear and have heard growing up. Therefore it is all influencing us. We want to make music we love.

The member(s) who does most of our writing is….Matt will typically write our templates, and we all write off of, or re write, using that template. It seems to work well. We all contribute for instance, I write the lyrics & melodies.

If we play another band’s music it’s….As a band we haven’t really jumped into that a whole lot. But 9 out of 10 times when we are goofing off, someone will slip in something we all know for a chuckle.

In the next six months you should expect….another video to our 2nd song that we did @ Lion’s Maine. As well as getting back into an undetermined studio to record our EP. As well as us playing out, when we can, in the Greater New England Areas. And to keep growing and developing as a new band!