What happens when you combine the kaleidoscopic theatrics of pop with the honest, confessional sound of indie-folk music?  You get Delaney Gibson.

Delaney Gibson is an Austin-based independent singer/songwriter with a music track record that most people can only dream of.  She has backed musical legends such as Barbara Streisand, Andrea Bocelli (Kim Kardashian’s favorite artist, may I add), David Foster, Barry Manilow, and countless others.  Her vocal talents have landed her on TV shows and segments such as Jimmy Kimmel Live, The Emmy’s, and even Baywatch to name a few.  I could honestly go on for countless paragraphs on all that this young singer/songwriter has accomplished, but the real focus here should be on her recently released album, Tall Like the Tree.

Delaney worked on this album, comprised of 11 distinct and honest tracks, with Canadian producer, Joshua Bartholomew, and string arranger, Laura Mihalka.  Each song has its own unique sound and narrative, but when pieced together they contribute to a larger story. In particular, Delaney recently released a music video for “Stars”, a single taken from Tall Like The Tree.  The music video is captivating all on its own, but the song itself is incredible.  Delaney dedicates “Stars” to everyone struggling to make a living out of their passion and wants the song to remind people to be bold, adventurous, and vulnerable.  To further promote this message, Delaney launched a social media campaign, #StarsCampaign, in the hopes that it will encourage people to be more transparent and truthful in the work that they show to the world. 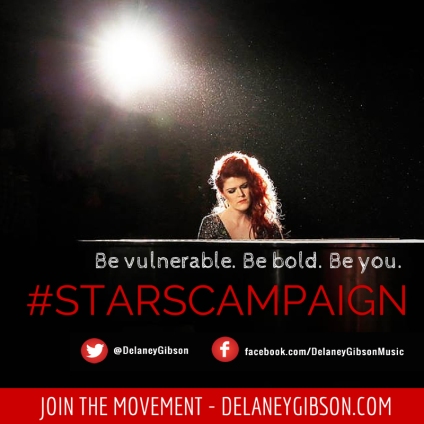 My words mean nothing if you don’t check out Delaney’s music, so below you will find the music video for “Stars”, but I also highly recommend listening to her entire album here (you won’t regret it).